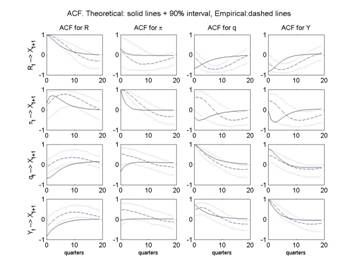 In order for you to learn how to practice with dynamic stochastic general equilibrium models, I suggest you learn to use the toolkit by Harald Uhlig, described on his webpage.

ost of these codes are written for the Graduate courses EC751: acroeconomic Theory and : onetary Theory and Policy that I teach at .

In order to understand how the toolkit works and, above all, how rational expectations models work, you have to read Uhlig (1997) Â“A Toolkit for Analyzing Nonlinear Dynamic Stochastic Models Easily'' . UhligÂ’s approach is based upon the method of the undetermined coefficients.

I suggest you to take the following steps:

7)     Create another directory in your computer, say C:\ATTEO

Below are the programs that need to go into C:\ATTEO

To plot the impulse responses of all the models below:

rbcsimple.mÂ  (which calls the rbcsimple_go.m file, which you will have to download too)

sidrauski.mÂ  (which calls the Sidrauski_go.m file, which you will have to download too)

sidrauski2.mÂ  (which calls the Sidrauski2_go.m file, which you will have to download too)

4) Leeper-Woodford model of interaction between monetary and fiscal policy

5) Credit cycle model based on my EC751 lecture notes (simplified version of Kiyotaki and Moore, JPE, 1997)

6) 3-equations, reduced form of the DNK (Dynamic New-keynesian) model based as described in McCallum AER paper (2001)

Slightly simpler version with 3 shocks only and no y(t-1) in IS curve (mc3.m and mc3_go.m)

7) Dynamic-new-Keynesian model with capital and habit formation and with productivity, monetary and cost-push shocks

- either dnwk_go.m: simplest version of the model, like in my EC751: graduate Macroeconomics lecture notes (Ch 4)

- or dnwk_p_go.m: version of the model with ad-hoc lags, with inflation and output chosen one period in advance, as in Boivin-Giannoni, Â“Has onetary Policy Become ore Effective?Â”, 2003)

y own personal version of how these models can be solved (based on the eigenvalue-eigenvector decomposition) is summarized in this pdf file, not to be quoted for whatsoever reason. This three pages handout refers to a Matlab file that runs the example model that I solve by hand with the above method.

This programs come as they are, and I accept no responsibility if your paper is rejected, your representative agent kills you, your country enters a recession because of these files.

However, if you happen to use these files, find any bugs or want to give me comments and suggestions you can email me at iacoviel@bc.edu, thanks!

Back to my home page